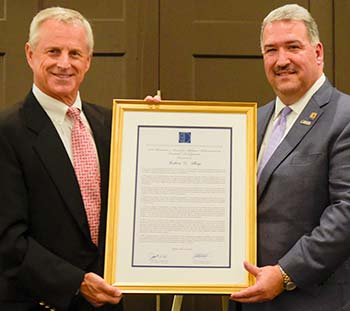 RICHMOND, VA – The Board of Directors and staff of the Greater Richmond Partnership, the region’s economic development group, is proud to announce that Bobby Ukrop, President/CEO of Ukrop’s Homestyle Foods, was awarded the Chairman’s Award for Lifetime Achievement in Economic Development by the International Economic Development Council (IEDC).

The Chairman’s Award, presented during the IEDC Annual Conference in Cleveland, Ohio, is given to individuals who have shown long-standing, exemplary commitment to economic development throughout their careers.

“It is an honor to receive such an outstanding award from the International Economic Development Council,” said Ukrop. “When Barry (Matherly) gave me the news, I was stunned. It’s such an unexpected surprise.”

Ukrop is currently spending his second consecutive year as chair of the Partnership’s Board of Directors. Prior to last fiscal year, he previously served during the 2003-2004 term.

“There’s no doubt the influence and impact that Bobby has had on this community, whether it’s economic development, workforce development or promoting an active lifestyle,” said Barry Matherly, President/CEO of the Partnership. “This only serves as the newest accomplishment to a person who has given so much to the Richmond Region. His outstanding achievements and dedicated service to his community go above and beyond to improve the lives of others and honor the economic development profession.”

Mr. Ukrop has invested in the regional economic development organization for 22 years; served as an active member of the board of directors for 12 years; and he is currently serving an unprecedented third term as chair. During his tenure with the board of directors, the Greater Richmond Partnership has helped create nearly 40,000 jobs and more than $8.6 billion in new investment into the community. Additionally, as the capital campaign chair for two terms, he helped the Greater Richmond Partnership raise more than $13 million from the local private sector. These proceeds funded economic development efforts across the region.

Also during the conference, the Partnership was recognized as the winner of the IEDC’s Gold Award winner for the promotion of Economic Development Week, celebrating the 90 years of IEDC’s impact.

The Partnership promoted Economic Development Week with a focus on recognizing individuals in the local business communities within the Richmond Region. The primary objective was to celebrate employment in a fun, memorable way that also integrated an educational element regarding economic development, and how economic developers work to positively impact the job market.

The campaign successfully generated awareness and increased participation in Economic Development Week at the grassroots level with a roving photo booth that boosted social media engagement. In addition to interacting with the general public, the Partnership hosted a luncheon to educate state allies about the newest regional assets. As part of the week, local economic developers organized business walks where volunteers knocked on doors and surveyed existing companies.

The Greater Richmond Partnership, Inc. was launched in 1994 as a pioneering regional public-private initiative to serve as the regional economic development group for the City of Richmond and counties of Chesterfield, Hanover and Henrico. Over the course of 22 years, the 501(c)(3) non-profit organization has assisted more than 485 companies that have invested $11 billion in capital investment in the Richmond Region.

About the International Economic Development Council

The International Economic Development Council (IEDC) is a non-profit membership organization serving economic developers. With more than 5,000 members, IEDC is the largest organization of its kind. Economic developers promote economic well-being and quality of life for their communities, by creating, retaining and expanding jobs that facilitate growth, enhance wealth and provide a stable tax base. Given the breadth of economic development work, our members are employed in a wide variety of settings including local, state, provincial and federal governments, public-private partnerships, chambers of commerce, universities and a variety of other institutions.