Richmond named a top U.S. City of the Future for Foreign Direct Investment 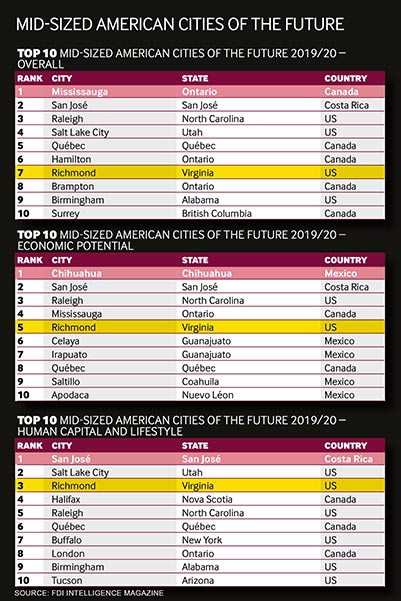 RICHMOND, VA – The Greater Richmond Partnership (“Partnership”) announces that Richmond, Va., was ranked as one of the winners of the fDi Intelligence’s American Cities of the Future 2019/20 rankings. The Richmond Region has earned accolades from the foreign direct investment (FDI) publication during the last 11 consecutive years of publication. 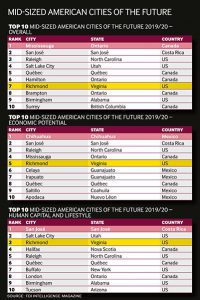 “Our consistent ranking by fDi magazine as one of the top places in the US for foreign direct investment cements our region’s commitment for even more successful international expansions to the region,” said Leslie A.T. Haley, Chair of the Greater Richmond Partnership and Chair of the Chesterfield County Board of Supervisors.

“More than two-thirds of our projects are foreign direct investment so these third-party rankings should help convince global companies to take a look at the Richmond Region,” said Jennifer Wakefield, GRP Interim President/CEO and Senior Vice President of Marketing.

‘Mid-sized’ locations had an immediate city population more than 200,000 and a wider Larger Urban Zone of more than 750,000 people, or an immediate city population of more than 350,000 people. To create a shortlist for fDi’s American Cities of the Future 2019/20, the fDi Intelligence division of The Financial Times collected data using the specialist online tools analyzing 218 locations. Locations scored up to a maximum of 10 points for each data point, which were weighted by importance to the FDI decision-making process in order to compile both the subcategory rankings as well as the overall American Cities of the Future 2019/20 ranking.

The Greater Richmond Partnership, Inc. (GRP) is the lead regional economic development organization for the City of Richmond and counties of Chesterfield, Hanover and Henrico in Virginia. GRP recruits companies from all over the globe which provide employment opportunities and taxable capital investment for the community. For more information, visit www.grpva.com.