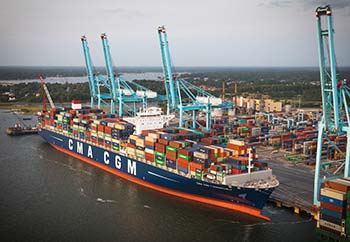 NORFOLK, VA – The biggest container ship to ever come to the U.S. East Coast, the CMA CGM Theodore Roosevelt, made its first stop at The Port of Virginia and in doing so surpassed a short-lived record for ship-size set earlier this summer.

The Richmond Marine Terminal is operated by the Port of Virginia and has a direct barge service to access larger vessels docking on the East Coast.

The Roosevelt’s vessel’s capacity is 14,400 twenty-foot equivalent units, or TEUs. The COSCO Development set the mark in May when it sailed into the Norfolk Harbor carrying 13,092 TEUs. Since then, slightly larger vessels have come and gone.

“This is a notable step-up in size. In Virginia, the big-ship era started in May and we continue to see larger and larger vessels,” said John. F. Reinhart, CEO and executive director of the Virginia Port Authority. “The $670 million we are investing to expand Virginia International Gateway (VIG) and Norfolk International Terminals (NIT) will enhance our big-ship readiness and our ability to safely and efficiently handle their increasing cargo loads. Last week, we ordered four new ship-to-shore cranes for VIG and they will be the largest ever delivered to the East Coast. It’s ships like this and those to follow that are driving our expansion.”

At first light Monday morning, a ship pilot from the Virginia Pilot Association safely guided the 1,200-foot-long vessel through the harbor to VIG, where nearly 3,000 containers will be loaded on and unloaded. A few hours after it was docked and cargo operations where underway, The Port of Virginia’s leadership team hosted leaders from CMA CGM North America at VIG to recognize the historic ship call. 600 World Trade Center I Norfolk, VA 23510 I ph (757) 683 8000 I toll-free (800) 446-8098 I portofvirginia.com

“This vessel is taking full advantage of our 50-foot channels, but its arrival also highlights our deeper, wider safer effort,” Reinhart said. “Our goal is to widen our channels and add five feet of depth. This would allow for two-way ship traffic and create the necessary depth – 55 feet – for these ships to load heavy and safely operate with the necessary river-floor clearance.”

Shippers, cargo owners, shipping lines and ports want to maximize the economics of the big ships and load them to capacity.

“The port that successfully moves ships at deep drafts will acts as a magnet for international commerce, Reinhart said. “Every additional foot of draft on a containership represents millions of dollars’ worth of cargo.”

As the ships get bigger, there are corresponding cargo loads. The ability to quickly move cargo by truck, barge and rail is critical to success and creates even greater opportunities for Virginia exports to reach world markets.

“Our new, $42 million North Gate at NIT is fully operational and by January 2018 it will link directly to I-564 via the I-564 Intermodal Connector, so we are improving service for motor carriers,” Reinhart said. “Of equal importance is our growing double-stack capability into new markets. Recently, we began offering daily doublestack service into the Lehigh Valley and in early September we’ll announce service into Pittsburg. We also have the ability to add sailings to the Richmond Express barge service.”

France-based CMA CGM is part of the OCEAN Alliance, which is an alliance of ocean carriers composed of COSCO, Evergreen Line and OOCL. In an alliance, the members agree to contribute ships and share space on those vessels. The vessel is in the alliance’s South Atlantic Express (SAX) service and it came to The Port of Virginia via the Panama Canal. In this weekly Asia-to-U.S. East Coast service, there are 11 vessels ranging in size from 11,000 to 14,000 TEUs. Virginia is the first U.S. port of call on the SAX service.

Big-ship history at The Port of Virginia: