Greater Richmond is made for an active lifestyle. The region is full of trails and it’s not uncommon to see cyclists enjoying a morning trek on the region’s bike lanes or joggers catching a few kilometers during their lunch break.

Richmond’s climate is classified as modified continental and there are four distinct seasons, allowing warm summers and generally mild winters. So, if you like having a year-round race schedule then you’ve found the right place to start your journey.

Greater Richmond features acres of outdoor space starting with James River Park, which was named among ‘best river parks in U.S.,’ and offers 550 acres of shoreline and islands. Richmond offers the only Class I-IV urban whitewater rafting and kayaking options in the nation. Pocahontas State Park boasts 7,700 acres of park and forest land. And if that’s not enough, the area also offers an additional 100 local parks and 6,500 acres of designated park land.

Thousands of runners stomp on our historic cobblestone streets during the Monument Avenue 10k and Dragon Boat racers skim the same water as Chief Powhatan. If you’re seeking competition – either against yourself or others — Greater Richmond has it. 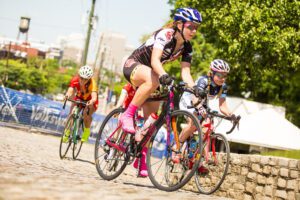 acres of local and state parks

Sign up to receive the latest regional news + updates